Montana Governor Greg Gianforte declared a disaster (link:  https://news.mt.gov/Governors-Office/Gov_Gianforte_Declares_Disaster_for_Flooding ) due to unprecedented flooding in south and central parts of the state from 10 June 2022.

The National Weather Service (NWS) in Billings, Montana, said (link: https://www.weather.gov/byz/June-2022-Unprecedented-Flooding), “The combination of anywhere from 0.8 to over 5 inches (20 mm to 130 mm) of rain and 2 to 5 inches of snow-water equivalent melt from June 10-13th led to unprecedented flooding across the Absarokas and Beartooths. This led to flooding rarely or never seen before across many area rivers and streams.”

Communities were left isolated after flooding washed out roads and bridges.  Flooding prompted numerous evacuations, in particular in areas of Carbon, Stillwater and Park counties. 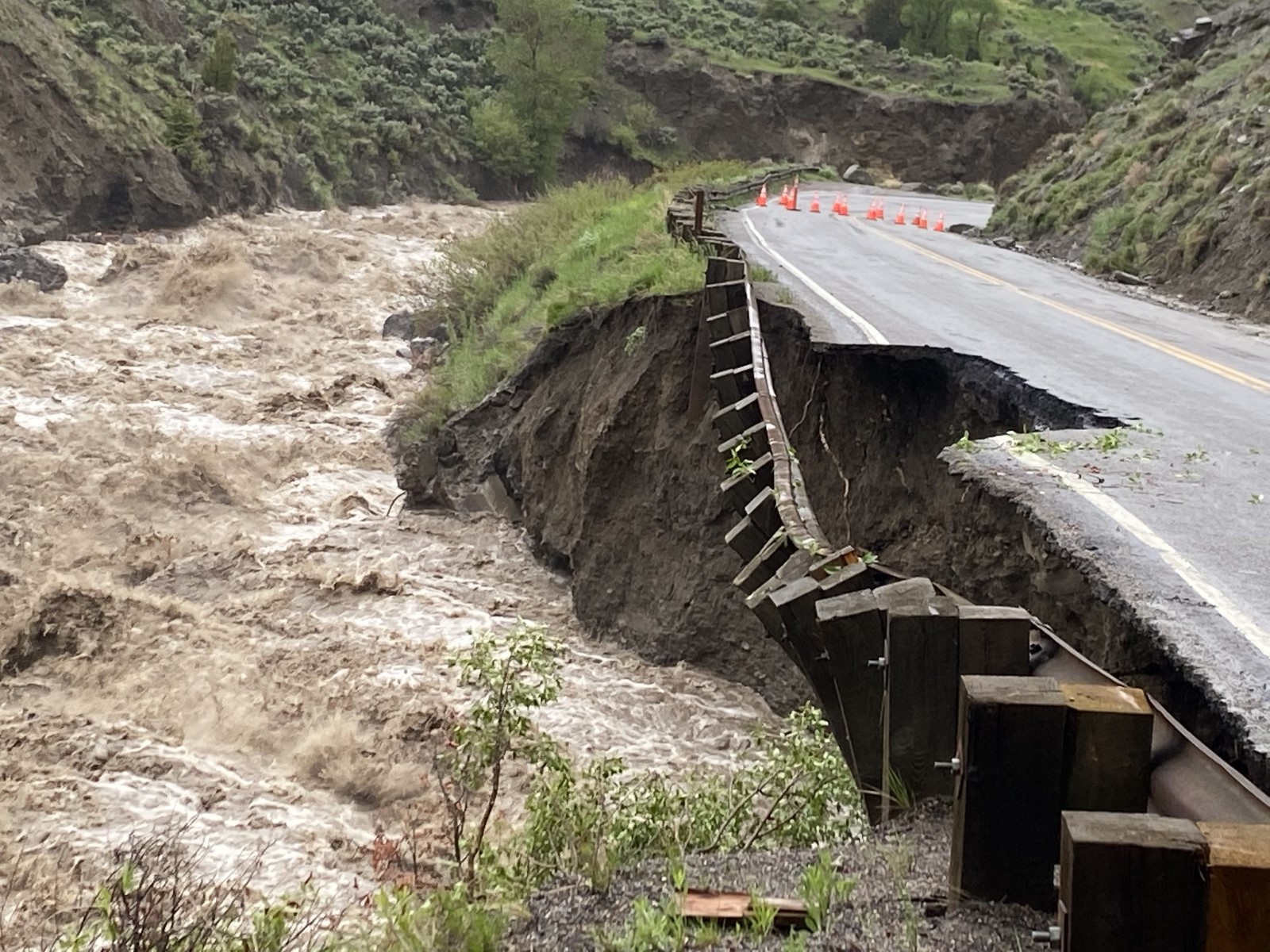 Park County officials said in a statement that “Travel is extremely limited and unsafe in many locations. Many bridges and roads are no longer operational. Many people are landlocked, including the communities of Gardiner, Cooke City, Silver Gate, the Cinnabar Basin, Tom Miner Basin, stretches of U.S. Highway 89 South, Mill Creek, and Old Yellowstone Trail.” 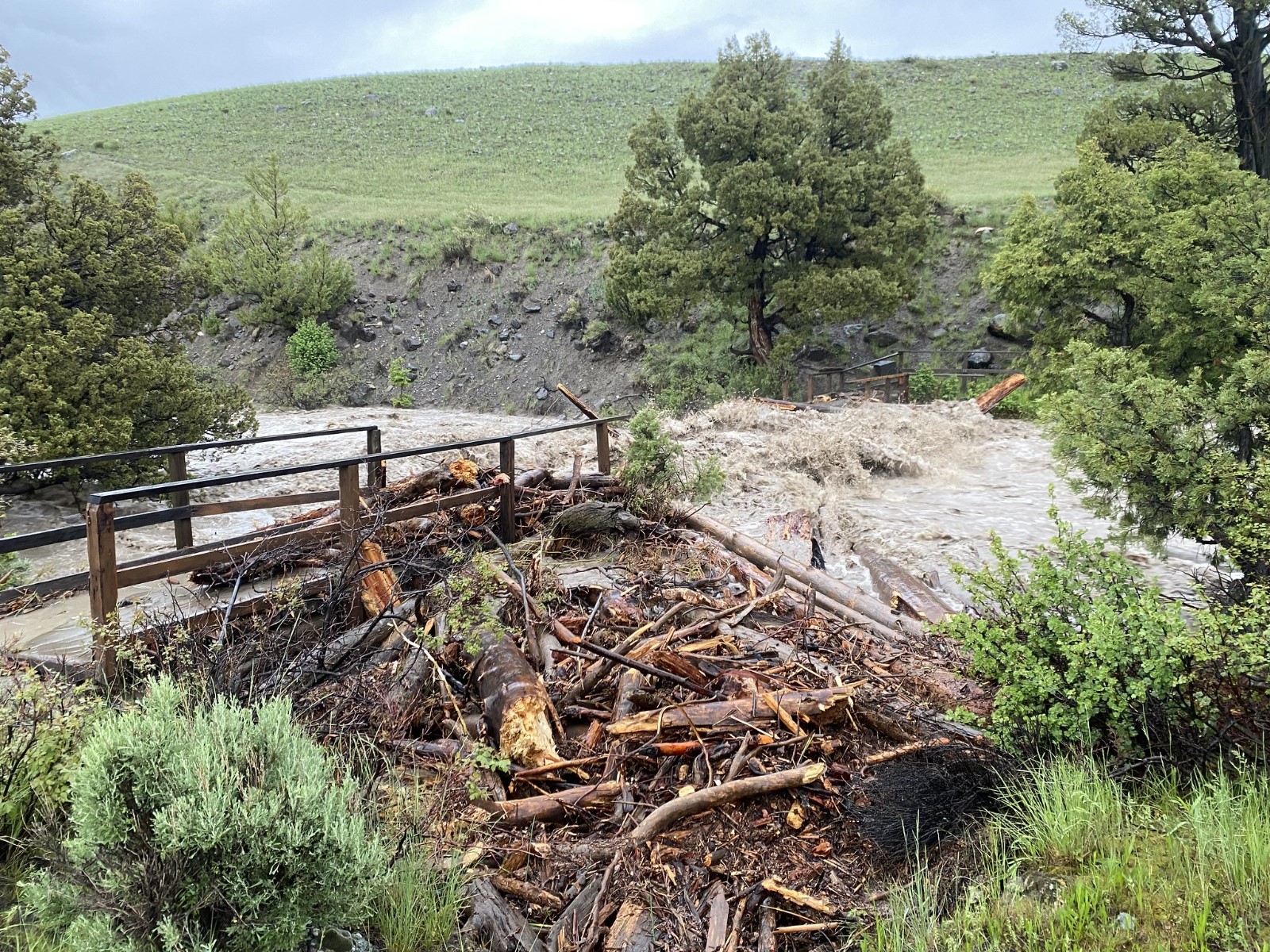 Yellowstone National Park officials closed all entrances to the park until further notice. “Due to record flooding events in the park and more precipitation in the forecast, we have made the decision to close Yellowstone to all inbound visitation,” said National Park superintendent Cam Sholly.

Stranded campers had to be rescued from the park.  The Montana National Guard sent two helicopters to assist. Media later reported more than 10,000 visitors were evacuated out of the park.

Over 100 homes and other structures including bridges were damaged or destroyed. A cabin along the Stillwater River was ripped from its foundations and dragged along the river near Nye.

As of 13 June 2022, rivers reached or were likely to reach record levels in at least 6 locations, according to NWS, including the Yellowstone River at Corwin Springs and Livingston; the Gardner River near Mammoth; the Clarks Fork of the Yellowstone near Belfry and Edgar; and the Stillwater River near Absarokee.

Federal Emergency Management Agency (FEMA) later announced that federal disaster assistance had been made available to the state of Montana to supplement state and local recovery efforts. 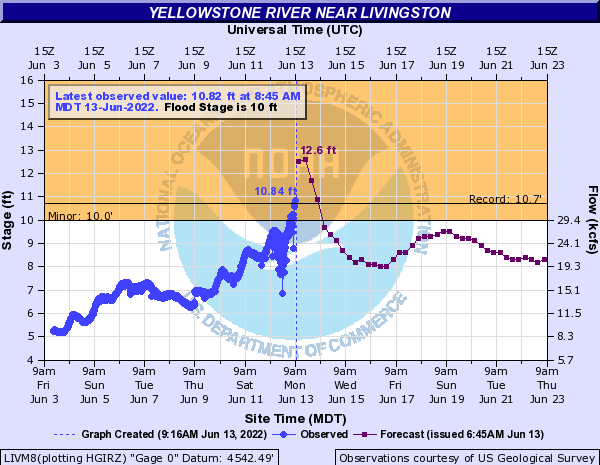