Floods in Pakistan, June to September 2022

In August 2022 Pakistan experienced flooding on a scale not seen since 2010. Pakistan’s Federal Minister for Climate Change, Senator Sherry Rehman, said "Pakistan is facing the worst humanitarian disaster of this decade and it has led to spectacular losses of lives, property and livelihood.”. The Pakistan Red Crescent described floods as causing “earthquake-like destruction”.

The onset of the 2022 monsoon brought heavy rains which caused damage, flash floods and landslides in several provinces in the country from mid-June.  Higher temperatures also resulted in Glacial Lake Outburst Floods (GLOF), for example in the Laspur Valley of Khyber Pakhtunkhwa Province on 03 July 2022 and in Hunza District, Gilgit-Baltistan Province on 02 July 2022. 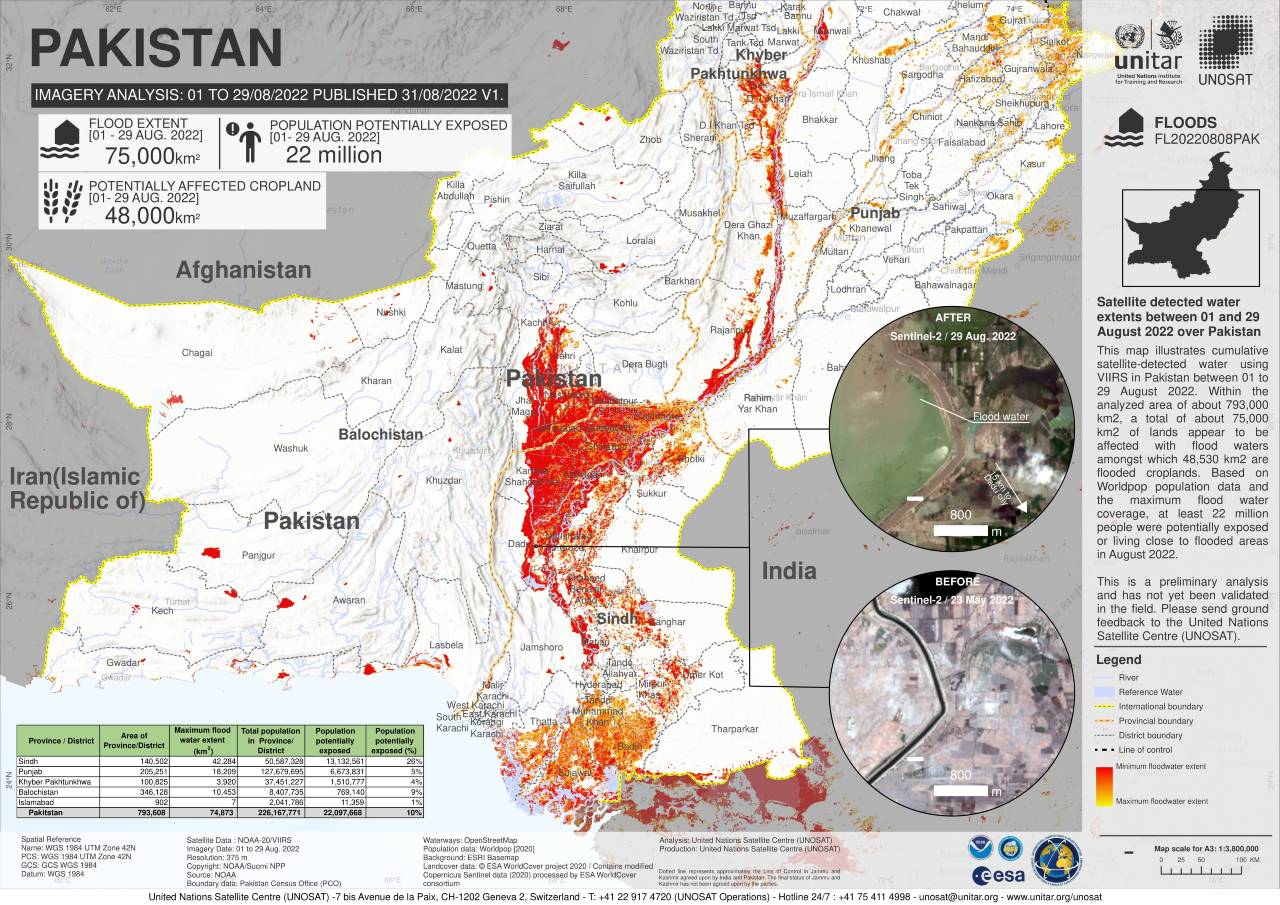 Figure 2: This map illustrates cumulative satellite-detected water using VIIRS in Pakistan between 01 to 29 August 2022. Within the analyzed area of about 793,000 km2, a total of about 75,000 km2 of lands appear to be affected with flood waters amongst which 48,530 km2 are flooded croplands. Based on Worldpop population data and the maximum flood water coverage, at least 22 million people were potentially exposed or living close to flooded areas in August 2022. See the full version here (https://www.unitar.org/maps/map/3604).  Credit : United Nations Satellite Centre (UNOSAT)

“Sindh has received 784% more rainfall than average for the month of August while Balochistan has received 496% more rain than normal,” the minster said.

Rivers including the Kabul, Indus and Swat all reached High or Very High Flood Level from mid- to late August.  By 21 August the Tarbela Dam on the Indus River in Swabi, Khyber Pakhtunkhwa, had reached its maximum storage capacity.

Images provided by the United Nations Satellite Centre (UNOSAT) on 29  August revealed that as much as 75,000 km2 of land – mostly areas of Balochistan, Punjab and Sindh Provinces – was underwater. 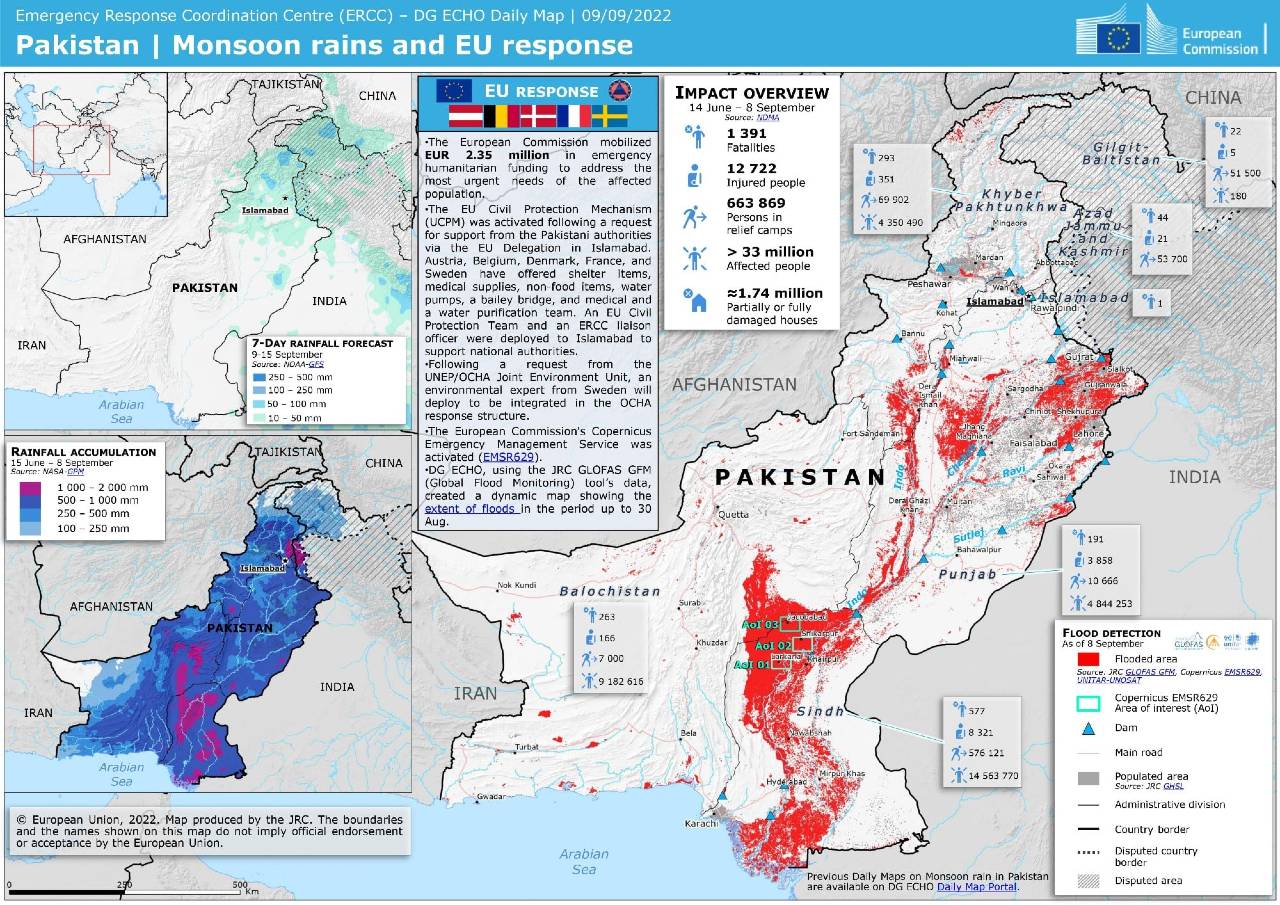 As of 07 September, 81 districts had been declared “Calamity Hit” (state of disaster equivalent) across the provinces of Balochistan (32 districts), Sindh (23), Khyber Pakhtunkhwa (17), Gilgit-Baltistan (6) and Punjab (3).

By early September over 1,300 people had lost their lives as a result of monsoon rain and flooding since mid-June, including 542 in Sindh, 292 in Khyber Pakhtunkhwa and 263 in Balochistan.

Over one million houses were damaged and half a million destroyed, along with 6,579 km of roads and 246 bridges. 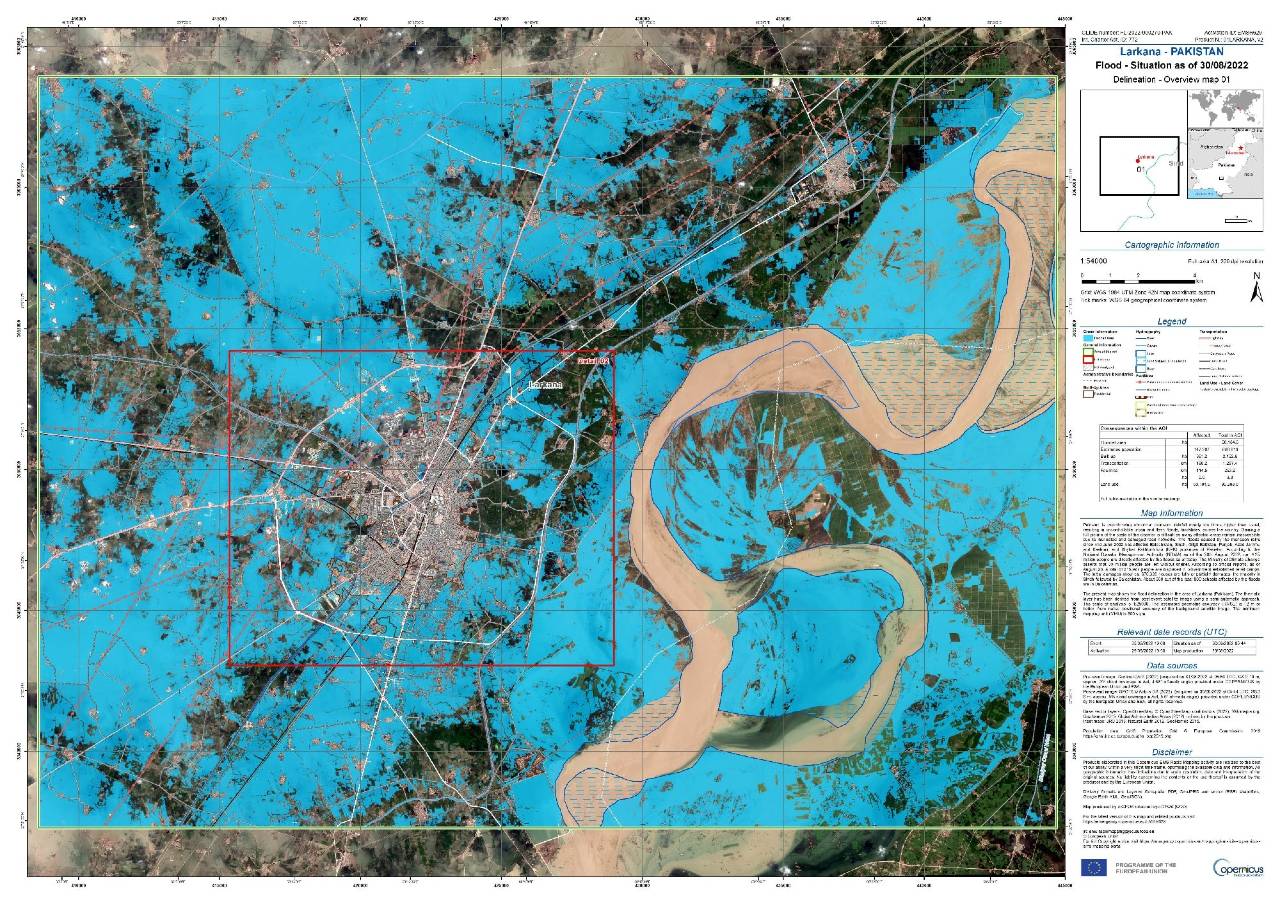