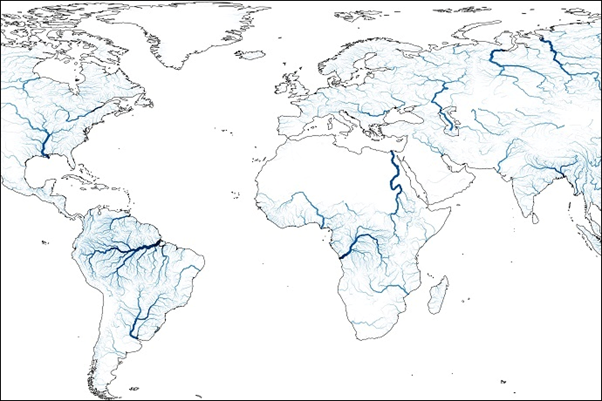 In view of the next major upgrade of the Global Flood Awareness System (GloFAS) of the Copernicus Emergency Management Service (CEMS), a new GloFAS v4.0 hydrological reanalysis dataset has been produced by the Joint Research Center of the European Commission in collaboration with the European Center for Medium-Range Weather Forecast. It enables users to analyse past flood or low-flow events, identify hydrological trends and prepare for the upcoming major release of the operational GloFAS.

The GloFAS v4.0 hydrological reanalysis dataset includes daily maps of discharge (in m3/s) with global extent at 0.05 degree (~5 km) grid resolution. It features several major changes in comparison to the GloFAS streamflow reanalysis v3.1. Most importantly, the spatial resolution of the dataset was increased from ~10 km to ~5 km, allowing for a more accurate representation of the river network. The latest state-of-the-art satellite-derived datasets, as well as a large number of ground measurements, were used to generate new input maps. These describe with higher accuracy the morphological, pedological, vegetation, and land use characteristics of the catchments.

The open-source hydrological model LISFLOOD was also developed further including upgrades in the hydrological routines and significant improvements in the management of large input datasets and computational performance. As a result, it is able to ensure the feasibility of the global model computations at the increased spatial resolution. Finally, a new model calibration at 1996 gauging stations and subsequently a parameter regionalization for ungauged catchments were performed  to ensure the best possible simulation of river flows for all catchments around the world.

The initial release of the new dataset makes river discharge data available from 1980 onwards. In early 2023, this will be widened to other variables, such as soil moisture and snow water equivalent.

More information on the technical documentation of the new GloFAS v4.0 hydrological reanalysis can be found on the GloFAS Wiki.

The new GloFAS v4.0 hydrological reanalysis dataset can be accessed and downloaded from the Climate Data Store of the Copernicus Climate Change Service.