In 2021, a new operational, near real-time global flood monitoring (GFM) was integrated into GloFAS. The new GFM provides a continuous monitoring of floods worldwide by immediately processing and analyzing all incoming Copernicus Sentinel-1 Synthetic Aperture Radar (SAR) satellite data. Being a fully automated system, one of the strengths of the GFM is the high timeliness of its products. Secondly, the implementation of three independently developed state-of-the-art satellite flood mapping algorithms, underpins the robustness and high quality of the derived flood and water extent maps.

How are GFM’s products generated?

GFM products are computed through the application of a set of flood detection algorithms to the satellite data retrieved by Sentinel-1, an ESA-powered constellation of two polar-orbiting satellites, operating day and night performing C-band synthetic aperture radar imaging, enabling them to acquire imagery regardless of the weather.

The incoming Level-1 Sentinel-1 datasets then undergo the preprocessing routines before being forwarded to the algorithms for water and flood extent detection. Sentinel-1 data are acquired in Interferometric Wide-swath mode and Ground Range Detected at High resolution (Sentinel-1 IW GRDH). The GRD products consist of focused SAR data that has been detected, multi-looked and projected to ground range using an Earth ellipsoid model, and phase information is lost. The resulting product has approximately square spatial resolution pixels and square pixel spacing with reduced speckle at the cost of worse spatial resolution. In this case the raw backscatter amplitude is sampled with a 10x10 m pixel size. Due to their higher sensitivity in differentiating water from non-water surfaces only VV-polarization data are considered. The output of the preprocessing is Analysis-Ready-Data (ARD) that is formatted and gridded, and immediately forwarded to GFM flood detection engine where three algorithms run in parallel to compute the near-real time flood mapping products.

The first algorithm is HASARD, developed by Luxembourg Institute of Science and Technology (LIST), is based on a scientifically validated and patented technology enabling a systematic, automatic, and high-accuracy monitoring of water bodies using Sentinel-1 data. The algorithm uses a highly innovative sequence of hierarchical image splitting, statistical modelling and region growing to delineate and classify areas that changed their flooding-related backscatter response between two image acquisitions from the same orbits.

Alg3 (Technische Universität Wien, TUW) fully exploits the entire Sentinel-1 signal history within the data cube, realized by a set of a-priori computed statistical parameters layers that provide a highly accurate characterization of Earth’s land surface at pixel level, as well as of the incidence angle dependency in respect to the Sentinel-1 mission. With those parameters as input, and with the mathematical legacy of Bayes, the water delineation procedure can be designed computationally relatively slim and is hence most suitable for global operations in NRT.

Finally, the ensemble flood mapping is computed. This “consensus” map is derived by putting together the results of the aforementioned flood detection algorithms. To generate the combined product, each pixel is attributed the ratio of the number of classifications as flooded to the number of algorithms that were applied: as an example, a number equal to 1 would mean that all three algorithms agreed on its classification as flooded. The final classification is straightforward and based on a majority decision, i.e., a pixel is accepted as flooded when at least two algorithms classify it as water. As a result, all other pixels of the Sentinel-1 footprint are classified as unflooded. 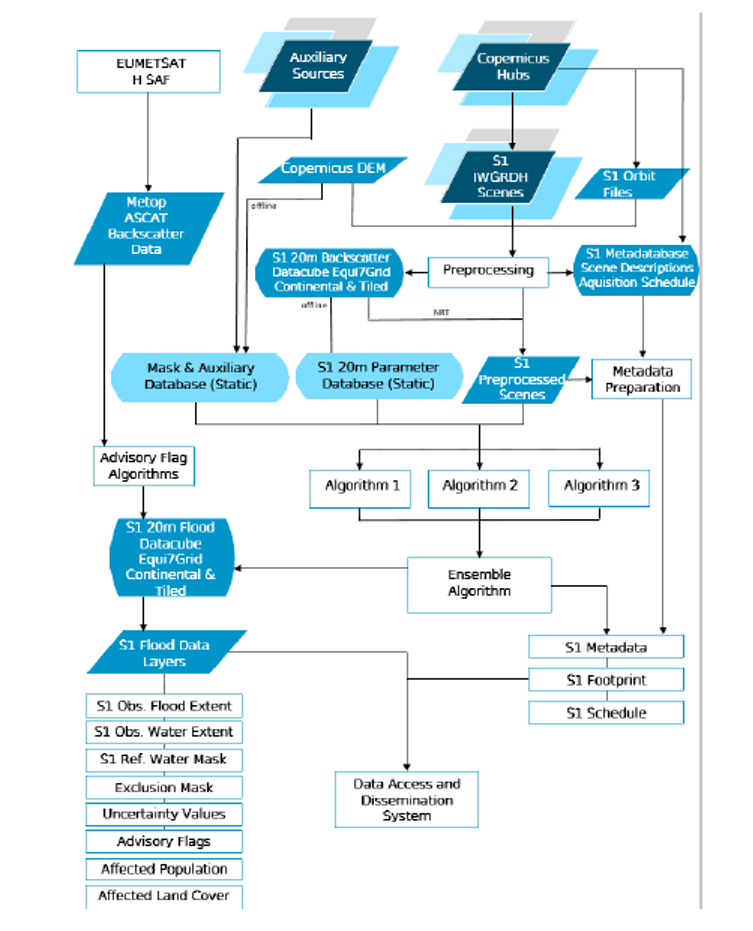 Which products does GFM offer?


GFM computes on a regular basis 11 different flood-related products, accessible via the hydrological layer tab of the GloFAS map viewer: For more details on the latest GloFAS configuration, please refer to the relevant wiki pages.