GloFAS is composed of an integrated hydro-meteorological forecasting chain and of a monitoring system that analyses results daily for GloFAS forecasts and monthly for GloFAS Seasonal. 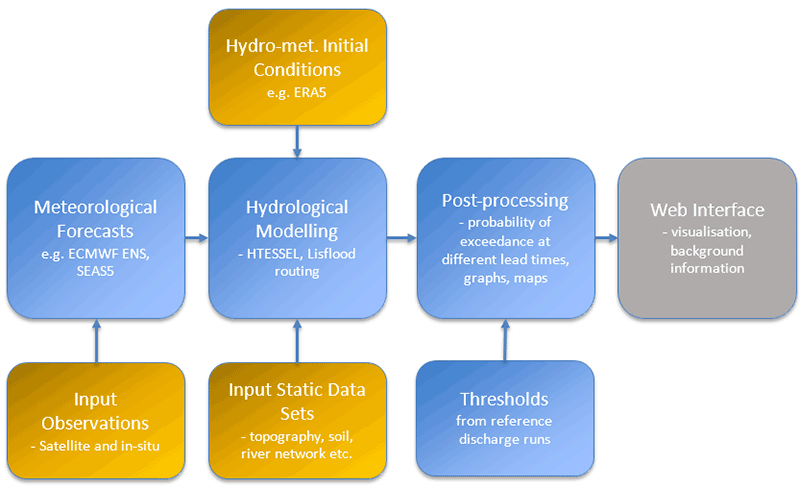 GloFAS real-time initial states (atmosphere and land surface) are the conditions from which to start the ensemble discharge forecast. They are provided by a daily update of the atmosphere, land-surface and river states, every day for the past 5-day period based on a monitoring analysis of the latest observations. Because of the latency in the availability of real-time reanalysis data, day-1 forecasts from the ensemble control run of the ECMWF Integrated Forecast System (IFS) are used as fill-up when necessary for GloFAS forecasts initialisation.

GloFAS forecasts are produced using the latest ensemble of Numerical Weather Prediction (NWP) forecasts of the ECMWF IFS. Surface and sub-surface runoff outputs are routed with the Lisflood hydrological model over the GloFAS river network. The runoff is computed with the HTESSEL land-surface model of ECMWF. The medium- and extended-range ensemble runoff outputs are used for GloFAS 30-day, and the long-range SEAS5 ensemble runoff is used for GloFAS Seasonal.

ECMWF forecasting system used in GloFAS
ECMWF-ENS is the ensemble forecast of ECMWF and consists of 51 members at ~18 km resolution up to 15 days, increasing to 36 km from day 16 to 30. In GloFAS 30-day, the outputs of the 00:00 UTC IFS medium-range runs are used daily for day 1 to 15, and the latest available IFS extended range runs used for day 16 to 30.

SEAS5 is the ensemble seasonal forecast of ECMWF (operational since 5 November 2017), and one of the seasonal forecast models of the Copernicus Climate Change Service. It consists of 51 members at ~36 km horizontal resolution. In GloFAS Seasonal, once a month SEAS5 runoff is converted into weekly-averaged streamflow with up to 4 months (16 weeks) lead time and published on the 10th of each month, in line with C3S SEAS5 forecasts publication date.

HTESSEL (Hydrology Tiled ECMWF Scheme for Surface Exchanges over Land) is the land surface scheme used by ECMWF in its IFS (Balsamo et al., 2009). HTESSEL computes the land surface response to atmospheric forcing, and estimates the surface water and energy fluxes and the temporal evolution of soil temperature, moisture content and snowpack conditions. Operational daily ensemble forecasts of surface and sub-surface runoff (soil to groundwater percolation) are extracted daily from the outputs of the ECMWF ENS and monthly from the outputs of SEAS5, then resampled to 0.1° resolution to be used as input to the river routing model of Lisflood. 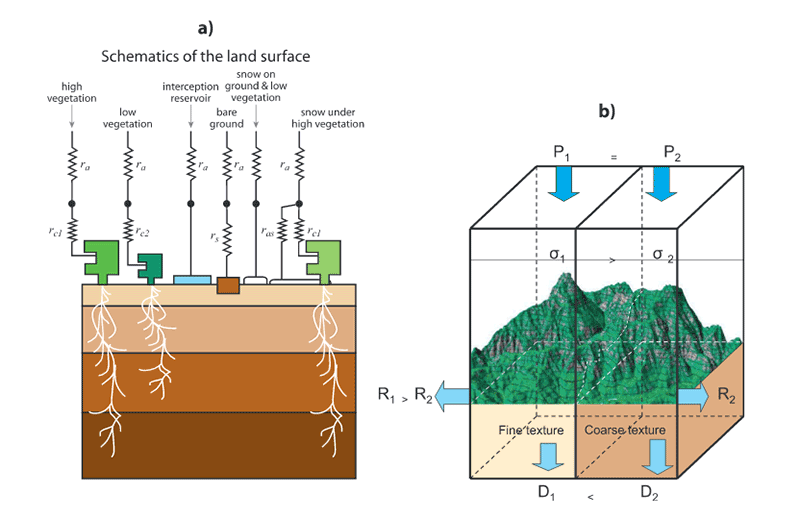 Lisflood (van der Knijff et al., 2010) is a GIS-based spatially distributed hydrological model, which includes a one-dimensional channel routing model. The Lisflood model is currently running within the European Flood Awareness System (EFAS) on an operational basis covering the whole of Europe on a 5 km grid.

In the context of global flood modelling in GloFAS, the transformation from precipitation to surface and sub-surface runoff is done by HTESSEL, with Lisflood global being set up to simulate the groundwater and routing processes. Surface runoff is routed via overland flow to the outlet of each cell; subsurface storage and transport are modelled using two linear reservoirs. Lisflood routing parameters were calibrated against observed discharge time series at 1287 stations across the world for better accounting of the variability in the hydrological processes (Hirpa et al., 2018). See Lisflood calibrations pages. 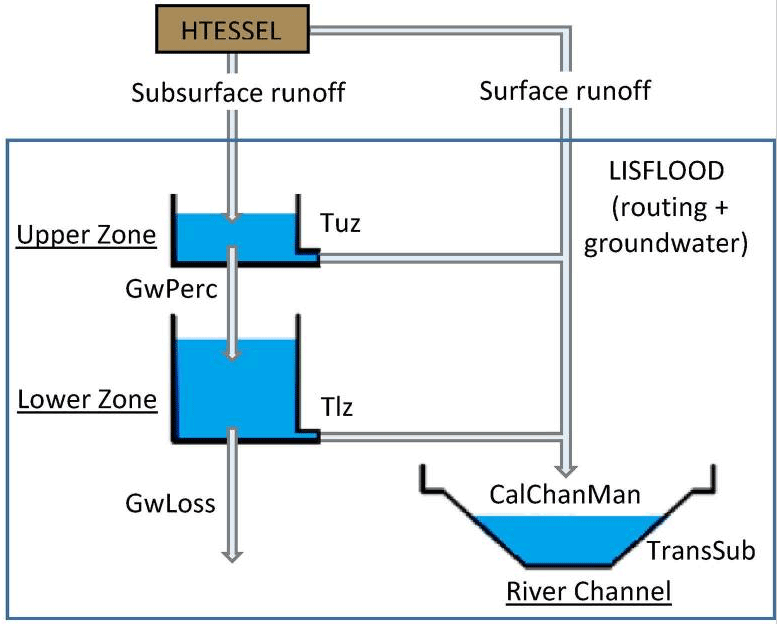 Schematic of the Lisflood hydrological model configuration used in GloFAS

GloFAS forecast reruns. They are forecast simulations performed for a set of past dates, based on a configuration as close as possible to the operational setting. They can be used to analyse GloFAS skill systematically over a long period or define lead-time dependant percentile thresholds (e.g. GloFAS Seasonal).

GloFAS discharge thresholds. They are sets of maps against which to compare GloFAS forecasts to generate flood awareness forecast or river flow anomaly maps. For GloFAS 30-day, they are based on the GloFAS forecasts hydrological reanalysis. For GloFAS Seasonal, they are based on GloFAS Seasonal forecast reruns, so that possible drifts in the forecast due to longer lead time are accounted for.

Please refer to the GloFAS wiki for the exact configuration of different GloFAS systems.

GloFAS is associated with a strict 2-digit version numbering system to uniquely identify the discharge produced by GloFAS forecasts:

For clarity and for their development cycles to be as flexible as possible, GloFAS forecasts and GloFAS Seasonal are considered as two independent systems with their own numbering, but following the same convention.

Each version comprises data associated with

Please refer to the GloFAS wiki to know the latest version currently in operation for GloFAS forecasts and GloFAS Seasonal.